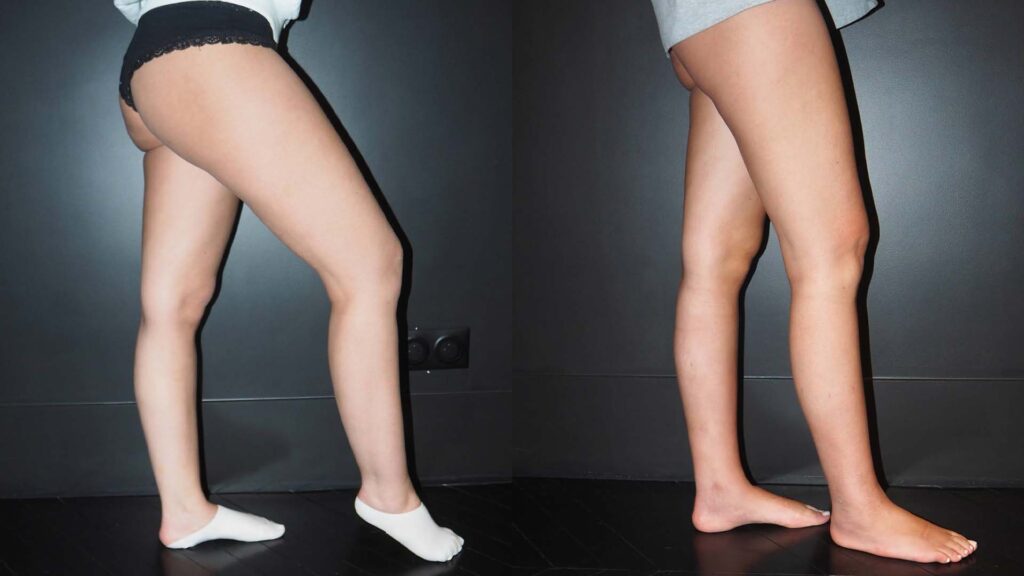 On the occasion of the interview of a patient operated by Doctor Nicolas Zwillinger for a liposuccion WAL ankle socks discover all the steps of this surgery.

Hello Mrs.F, could you introduce yourself?

My name is Mrs. F. I am 28 years old and I have known I had lipedema for two years.

For a long time I tried to understand what was causing my pain, but no matter how much I consulted, I was told that it was temporary.

I went to an angiologist in 2019 to have an echo-doppler scan and he was able to diagnose me with lipedema in my lower limbs. However, this doctor also told me that there was no solution today to cure this disease.

What were your symptoms?

I have always had pain only in my ankles and some swelling at the end of the day.

I didn’t understand the reason for these pains and those around me told me that there was nothing to do and that it would pass with time. But this pain did not pass, it was always there and always intense.

How did you find out about the possibility of performing a surgical procedure and more specifically an ankle sock liposuccion WAL?

I wasn’t convinced that there was no solution so I started to do my own research on lipoedema.

I started my research on the internet and while browsing I discovered the website lipoedème-france.com, one of the only French websites dedicated to this disease.

I then spoke to my GP about liposuction WAL, a technique for treating lipoedema. My doctor reassured me and confirmed my surgical project.

I then followed on social networks, more precisely on instagram, the patients who had undergone liposuccion WAL operated by Dr. Nicolas Zwillinger.

They talk about their procedure and it’s a bit like a return on experience. The feedback reassured me a lot and convinced me to make an appointment with Dr. Zwillinger for a consultation. It was an opportunity for me to talk to a doctor who is able to offer me a solution and make a real diagnosis.

How did your first consultation with Dr. Nicolas Zwillinger go?

I made an appointment via doctolib with the doctor for April 2021.

The appointment took place at Dr. Zwilinger’s office, where I was able to explain my pain and present him with the results of my examination (Doppler ultrasound).

Dr. Zwillinger made his diagnosis and confirmed that I had stage 1 lipedema in my lower limbs and that the pain I was experiencing was indeed related to this disease. He then suggested liposuction with the WAL technique (Water-Assisted-Liposuccion) to treat my lipedema.

Following this consultation I received a quote, an information sheet detailing liposuccion WAL and a prescription for a lymphoscintigraphy.

When did you decide to carry out the intervention?

After this first consultation I thought about it for a few days because it was an important decision to make.

After a week, I made my decision and sent an email to Dr. Nicolas Zwillinger’s secretary to find out what surgery dates would be available after the new school year.

Can you tell us about the preparation for this intervention?

At the end of July 2021, I made another appointment with Dr. Nicolas Zwillinger because I felt the need to talk to him again before the operation scheduled for October 2021.

I mainly wanted to make sure that there was no risk of recurrence of the removed fat in the treated area and the doctor confirmed that this would not happen with the WAL technique. We then discussed the area to be operated on, i.e. ankles and socks only, as this was where my pain was concentrated and it was this area that I wanted to treat first.

It was after this appointment that I received by email all the elements allowing me to schedule my operation.

I received the consent and estimate to sign as well as all the medical prescriptions and various prescriptions necessary for the post-operation period such as those for nursing care. I was therefore able to schedule the nurses to provide home care the day after the operation.

My operation was scheduled for the beginning of October 2021 at the Étoile clinic and I was waiting patiently for this date!

In order to prepare for my operation, I also made an appointment with the anaesthetist of the Etoile clinic, Dr.Gloulou via the Qare application. I was able to talk to him during a video consultation about the different types of anaesthesia.

My mother, who attended the consultation with me, was not comfortable with the idea of me having a general anaesthetic, so after discussing with Dr Gloulou we agreed to carry out the operation under spinal anaesthetic. Furthermore, as it was a small area to be operated on, I was not stressed about being awake during the procedure.

How did your intervention go?

The big day of the operation finally arrived!

I arrived at the Etoile clinic at the agreed time. First, there is the registration at the clinic’s admission desk. Then I was taken to my room and met the nurses who would be looking after me.

Then we went to the operating room, I saw Dr. Nicolas Zwillinger in the operating room and we exchanged in order to re-situate the area to be operated on, he made drawings on my ankles and then I settled down to proceed with the spinal anaesthesia.

Once the anaesthesia was done, they installed the medical drapes and proceeded with the liposuction.

I was conscious and felt no pain, I was talking to the anaesthetist to relax.

Once the operation was over I was taken to the recovery room for a few moments and then returned to my room. I was able to have a first snack and then Dr. Nicolas Zwillinger’s secretary came to see me in my room to explain the post-operation protocol. I was able to ask her any questions I had, especially about the double restraint…

The nurses from the clinic helped me to get up for the first time and at the end of the day, when I was fit to go out, I was able to join my mother who was waiting for me to return home.

Tell us about your post-operative experience – Liposuccion WAL Ankle socks.

The first night was difficult, I had a vagal discomfort and I had important sensations of tugging on my ankles and heavy legs. I had some discharge but it didn’t last long.

The nurse who came to my home took care of the LOVENOX injections, the changing of my dressings and also the fitting of my compression stockings and BIFLEX bandage. Honestly, it was sometimes very difficult to bear the pain of the double compression.

I had to be patient and I know that today patience is the virtue that is essential for a good recovery.

I really appreciated the fact that the day after the operation Dr. Zwillinger’s assistant contacted me to check on me. I told her about the post-operative effects, she reassured me and gave me a few tips to ease my pain, such as using cold/frozen packets to put on the painful areas for a few moments when I woke up. I used frozen pea bags and it gave me a lot of relief.

10 days after the operation I started my lymphatic draining sessions and it is from this moment that the oedemas started to dissipate little by little.

One month after my operation I went back to see Dr. Nicolas Zwillinger at his office for my post-op appointment.

We discussed the postoperative protocol and I was able to ask him further questions.