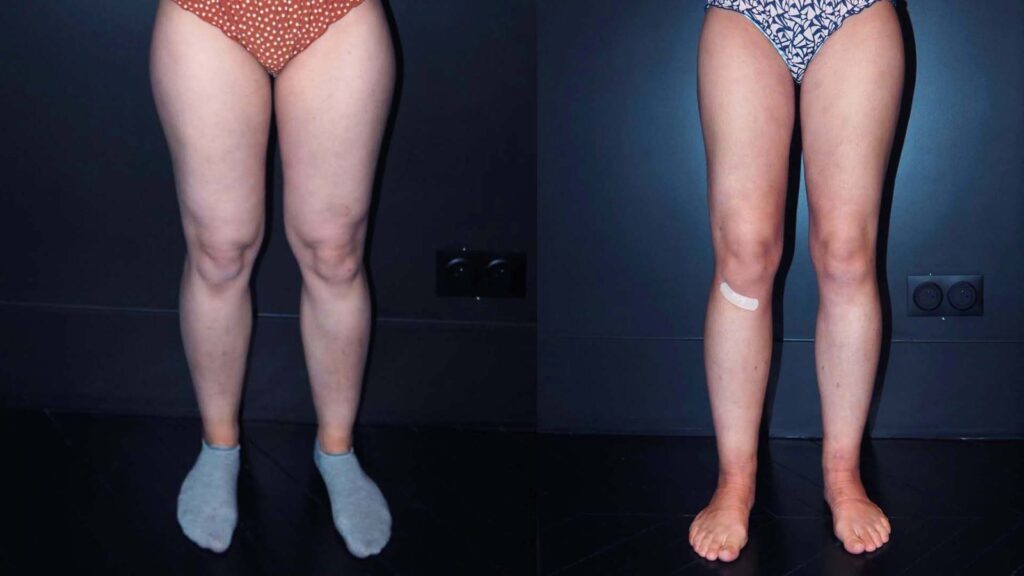 Can you introduce yourself?

My name is J. I am 27 years old, I am a pharmacist and since I was a teenager I wanted to have an operation on my legs and calves because I found that they had a rather atypical shape. I had initially consulted several other doctors before taking the plunge and carrying out this liposuccion WAL operation. Indeed, but I didn’t feel like taking the plunge because I didn’t have a good feeling with the doctors I consulted before Dr. Zwillinger Nicolas.

How were you diagnosed?

I must admit that I didn’t know this for a long time. It was while looking for a doctor that I came across Dr. Nicolas Zwillinger’s website and the lipedema website. So I started to go further in my research and my medical examinations (echo-doppler, lymphoscintigraphy…).

I then recognised myself during the appointment with Dr. Zwillinger Nicolas when he showed me the photos of patients with lipedema. For me, the particularity is that I don’t necessarily have the symptoms and pain. However, this is quite justified because I have a rather early stage. I often had bruises but no pain. However, as I am on my feet all day in the pharmacy, I sometimes had heavy legs.

What did you decide with Dr. Nicolas Zwillinger at the first appointment?

During my first consultation with Dr. Nicolas Zwillinger I mentioned that I find my legs and thighs rather oddly shaped and I presented him with my various examinations. Since I have a very early stage of lipedema, the doctor suggested that I undergo a liposuccion WAL of the following areas: ankles, calves, knees and saddlebags in one operation.

Can you tell us more about your preparation for the intervention?

I first received all the administrative elements and my medical prescriptions from the secretary. I also had to make an appointment with Dr Gloulou, the anaesthetist of the clinic where I had the operation. I met the anaesthetist, he is as fantastic as Dr. Zwillinger, very attentive and very kind. After my appointment with Dr. Gloulou I decided to have the operation under spinal anaesthesia. I did not want to be put to sleep completely.

I also had a bleeding disorder and had to undergo a lot of additional tests to make sure that this operation was feasible and without risk.

Tell us about the day of your liposuccion WAL procedure…

A little stressed, I go to the Étoile clinic with my panty in my backpack.

I register at the admission desk, the staff is very nice, and I go to my room. The nurse gives me all the instructions. Charlotte, the doctor’s assistant, accompanies me to the operating room. We went over the areas to be treated with Dr. Zwillinger Nicolas and then the operation began.

How was the post-operative period of your operation?

It wasn’t easy at first but I was prepared. The first 7 nights I had a lot of pain. During the day it got better. I felt like I was getting big electric shocks and tingling in my legs.

During the day, the pain was mild to moderate.

The first week I had a lot of discharge and it was difficult to put the compression stockings back on because of all the bruising, but then it was much easier.

I did my lovenox injections alone every day for 10 days.

I tried to walk as much as possible.

The transition to the shower was a bit difficult, I had two fainting spells but I can feel the improvement day by day.

Finally, you had your post-operation appointment with Dr Nicolas Zwillinger

I did this test at 6 weeks post-operative.

After 3 weeks, I was already well recovered.

I went back to work exactly 19 days after my operation, it is important to give yourself time to recover.

If I can give some important advice: You have to be patient, give yourself time, be prepared for the pain. There are painkillers that easily calm the pain. You need to be surrounded during the first few days.

The general state of health improves very quickly but patience is important to obtain results.