POLE LEGS DISEASE : PROFILE OF THE PATIENT AFFECTED BY LIPEDEMA 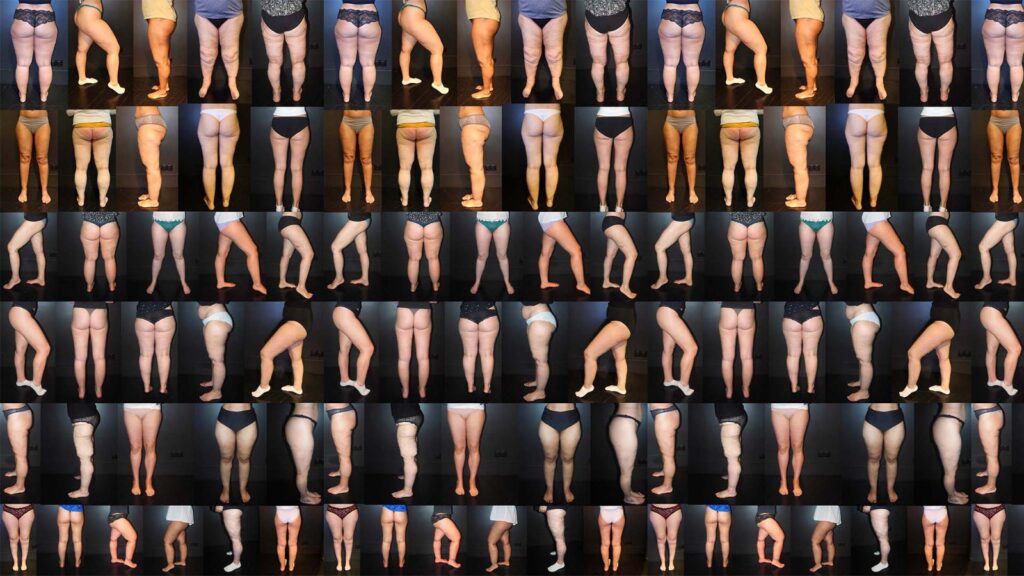 1 – PROFILE OF THE PATIENT CONSULTING DOCTOR NICOLAS ZWILLINGER IN THE CONTEXT OF HER POLE LEG DISEASE :

It is important to specify that this condition affects a vast majority of women and sometimes even men, of which Dr Nicolas Zwillinger has not yet consulted on.

It is estimated that between 20 and 25% of patients have already been diagnosed with lipedema, sometimes by an angiologist or phlebologist, in rare cases by the general practitioner and most of the time by self-diagnosis. As this condition is relatively unknown in France, Emmy Make-up’s portrait on this subject in the programme “Sept à Huit” enabled many women to put a word in for their suffering: lipedema!

This consultation with Dr. Nicolas Zwillinger is thus an opportunity to make or confirm the diagnosis and to determine the affected areas. All the women who consult us are affected in the lower limbs (ankles, calves, knees, thighs and saddlebags) but in 25% of cases lipedema also affects the upper limbs (arms and sometimes forearms).

There are different stages of lipedema, allowing the severity of the pathology to be measured, stage 1 corresponding to the least advanced stage and stage 4 the most severe. In his practice, Dr Nicolas Zwillinger has observed the following distribution:

The genetic factor in post-shape leg disease has not been proven, but 55% of the patients who consult Dr Nicolas Zwillinger believe that a member of their family is also affected (mainly their mother and grandmother). Do not hesitate to consult our article on this subject.

In order to treat this condition, patients consulting the surgeon have already used different techniques:

For some of these techniques a temporary solution/relief may be felt but they are techniques that limit the progression of lipedema or induce a short-lived reduction in symptoms.

The most common symptoms in women with lipedema are pain, heaviness, puffiness and bruising that occur spontaneously.

During the first consultation, Dr. Nicolas Zwillinger explains the WAL liposuction technique in detail, answers all the patient’s questions and gives a quote for a possible operation.

2 – PROFILE OF THE PATIENT WHO WAS OPERATED ON POLE LEG DISEASE BY DOCTOR NICOLAS ZWILLINGER:

To date, Dr. Nicolas Zwillinger has operated on more than 260 patients suffering from lipedema.

The average age of the patients operated on in this context is 36 years. The youngest was 17 years old on the day of her operation and the oldest 75 years old. The graph below shows the distribution of patients according to their age. We can see that the vast majority of the women operated on are between 25 and 45 years of age, however there is no age limit for having WAL liposuction, we invite you to read an article on this subject.

On average, two operations are required to treat lipedema, and if the upper limbs are also affected, then three are required.

Liposuction operations for the treatment of lipedema are currently divided as follows:

The order of the operations may be different depending on the patient’s needs and the surgeon’s opinion.

Women often ask “how much fat will be removed by liposuction?”, this depends on many factors (stage of lipoedema, BMI of the patient, suctioned areas…). In the illustration below you can see the average volume of pure fat aspirated according to the areas aspirated. It can be seen that the “thigh” area is the area where the most fat is aspirated, making this procedure generally more tiring.

Through this article we have put forward the typical profile of a patient affected by post legs. It is important to bear in mind that this condition affects all types of women, regardless of their social background, origin, weight, height or age. It is possible to take action no matter what your profile is, we invite you to complete the online pre-consultation in order to get in touch with our teams to learn more, or to join the #jesuis11% community.